This Cranesbill is unusual in having dark brown leaves with green midribs, which are particularly prominent on this new cultivar.  It was discovered in a garden in Maryland, USA, and named for the owner’s niece.  The flowers are a rich purple-pink, held clear of the foliage during spring and summer.  Like most of this species it prefers a moist soil that does not dry out in summer.  It is tolerant of more sun than most, although we have found the brown ‘washes out’ in strong bright sunlight.  Deservedly given AGM status (Award of Garden Merit) at the 2006 RHS Hardy Geranium Trial, conducted by the Royal Horticultural Society.  Hardiness rating H7.

Tidy the plant in early spring, before the new leaves appear.  To propagate divide the rhizome but do not plant the pieces too deep.  This geranium also sets seed and although it doesn’t come true you do get some interesting seedlings. 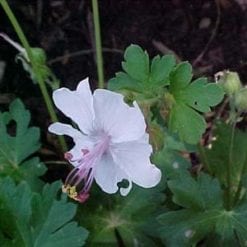 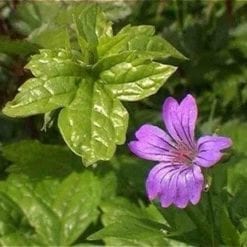 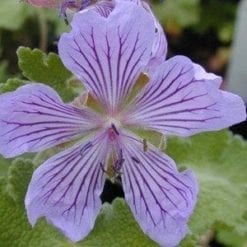